Introduction to SCAR-H (aka. Mk17)

The SOF Combat Assault Rifle-Heavy, or SCAR-H, (also designated Mk 17 Mod 0) is a modular, modern Battle Rifle made by FN Herstal. The SCAR-H differs from the SCAR-L in that it is classified as an adaptive battle rifle rather than an assault rifle, and utilizes a smaller, 20-round box magazine over the lighter version's 30 round STANAG, as well as the larger 7.62x51mm cartridge, and longer barrel. 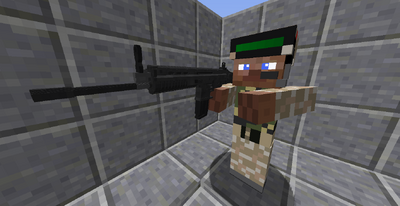 Player holding a SCAR-H loaded with 30 round .300 AAC BLACKOUT magazine
Community content is available under CC-BY-SA unless otherwise noted.
Advertisement